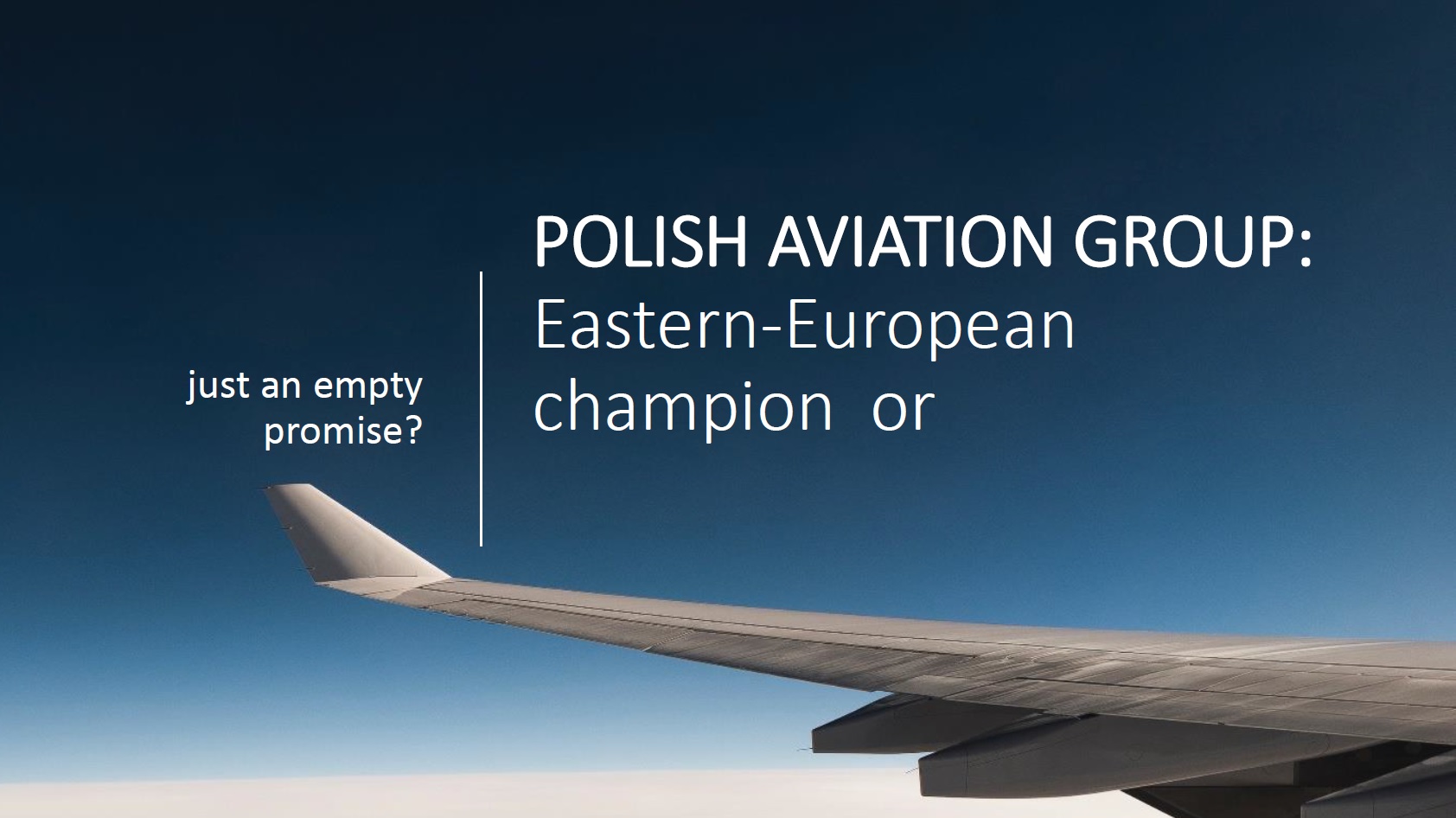 Jan Kaczmarczyk and Michał Lutek have been writing about the Polish Aviation Group SA (PAG) for the International Bar Association.

The article aims to present a comprehensive insight into the issues concerning the Polish Aviation Group SA (PAG). It is composed of four parts. The opening outlines the problem of wide-scope privatisation in a number of industries in Poland, including aviation. Subsequently, the background of the creation, along with corporate structure of PAG, are described. The third passage focuses on the activity of PAG in the field of aircraft leasing. Finally, major legal and business aspects of the functioning of the group are briefly summarised.

Recent decades have shown that many countries have inclined towards privatisation of the aviation industry, specifically of air carriers, whereas Poland has done quite the opposite during recent years.

The current Polish government, while undertaking measures focused on ‘re-Polonisation’ (read: nationalisation) of, for example, banks, heavy industry and the energy sector, has also had a hand in aviation companies. The political decision, and consequent establishment, of the Polish Aviation Group (PAG) – a fully state-owned company that took over control of public entities from the aviation industry – requires a closer analysis and review of the goals to be achieved by this process.

In this article we also try to assess the potential influence of the PAG on the European aviation market as well as outline major legal concerns related to its creation.

How and why did PAG come to be?

The PAG was founded in 2017 as a joint-stock company. The Polish Treasury equipped the PAG with capital stock at the level of PLN 2,597,603,000 (roughly €600m). The company is run by the current Chief Executive Officer of LOT Polish Airlines, Rafal Milczarski, who had declared he would hold this office pro bono. The PAG consists of the following subsidiaries: (i) Lot Polish Airlines; (ii) Lot Aircraft Maintenance Services; (iii) LS Airport Services; and (iv) LS Technics. What is the difference between (ii) and (iv)? Both sound like maintenance, repair and overhaul (MRO) companies.

These companies, now being part of the PAG, had previously conducted their operations independently – at least in theory – and were responsible for passenger traffic, MRO and airport handling, respectively. Even though it is quite common for many countries to have their own flag carriers fully owned by the state, for example, Royal Air Maroc, it is not common practice to create an entity incorporating an airline, handling company and aircraft maintenance company. Without doubt, such structures exist both in European and American markets (Lufthansa Group being a good example), but in their case consolidation is revenue-driven, or at least based on a cost-optimising principle. However, in the case of the PAG, it appears that economic factors gave way to political ambition.

A requirement, and indeed questionable decision, in the process of consolidation of aviation companies into one ‘omnipotent’ holding came from the Office of Competition and Consumer Protection. Polish (as well as EU) statutory law requires companies to notify the Office about the intent of concentration. The President of the Office, by way of a decision, may grant a consent for concentration only if it does not cause impediment to competition in the market. In the PAG’s case, a legally binding and final decision was granted on 13 August 2018.

The last formal phase in the process of establishing the PAG took place on 10 October 2018, when a notarial deed declaring, inter alia, an increase in capital of the company to the above-mentioned level was signed by the Chancellery of the Prime Minister of Poland.

PAG business activity in the field of aircraft leasing

The dubious synergy effect resulting from consolidation of the companies was only one of the officially claimed incentives to establish the PAG. According to the CEO of the PAG, a separate fund will be created so that the PAG can take up leasing activity. Most of the PAG’s share capital of over PLN 2.5bn is intended to be used directly to finance leasing operations. Given the prices for the most popular types of aircraft, such as the A320 or B737 (including neo-s and MAXs), without additional sources of financing, it may still be tough for the PAG to develop its activity on a wide scale. Moreover, the PAG, as a rather new player on the market, will most likely face difficulties in negotiating with aircraft manufacturers.

Development of ideas is needed on how to allow the PAG to take off with leasing activity comprising purchase of aircraft in its own name and on its own behalf so that they can be later leased to airlines and other entities, both in the group (currently LOT Polish Airlines leases its aircraft from different providers such as Air Lease Corporation or Avolon) as well as outside of it. It is unclear how, in such a structure – that is, being a parent company of a flag carrier of Poland – the PAG intends to enter into transactions on an arm’s-length basis while dealing with its direct competitors.

Another legal concern is the issue of state aid. LOT Polish Airlines was a state aid beneficiary in 2015 when the carrier was subsidised by the state, with a sign-off from the European Commission (EC), to the amount of PLN 804m (200m).

Given the one-last-time principle, which means that any given company can be a state-aid beneficiary only once in a ten-year period, creation of a holding-like entity as a stated-owned company may raise concern. This is because cash flow between companies forming the PAG, in some cases, may be considered as state aid and subject to Article 107 of the Treaty on the Functioning of the European Union.

Who needs ratification of the Cape Town Convention more – Poland or the PAG?

The problems relating to the issues of securing transactions, especially leasing agreements, involving aircraft and engines were observed by the international community at the beginning of the 21st century, thanks to the efforts and involvement of the International Institute for the Unification of Private Law (UNIDROIT). The Convention on International Interests in Mobile Equipment along with Aircraft Protocol thereto were adopted in 2001 in Cape Town (Cape Town Convention).

Although the Cape Town Convention was ratified by the EU in 2009, its scope of application in Member States is limited to certain areas: jurisdiction or bankruptcy proceedings. Poland is not a party to the Convention. This leads to serious implications in the light of creation of the PAG, especially if it intends to secure clients other than the Polish flag carrier, or for leasing by LOT.

The Convention provides the creditor (usually being a lessor or any other entity financing the transaction) a wide range of protective mechanisms. If an airline is in breach of contract, the creditor may exercise rights having far-reaching consequences for the business activity of the chargor, such as collecting or directly receiving any income or profits arising from the management or use of the aircraft, or even ‘grounding’ it at the airport or repossession.

Thus, the advantages of Poland ratifying the Convention be felt by the PAG, as this newly established holding could secure its interests in potential transactions. Moreover, it would lower the costs of the leasing agreements by reducing the need for additional security. Ratification would most likely also benefit other Polish airlines and parties operating aircraft, as lenders and lessors would be more protected and more willing to transact with them.

Rising interest in the aviation industry can be observed throughout Europe. This is reflected in the construction and development of airports, as well as a growing number of aircraft orders. The Polish government, seemingly lured by the success of similar corporate structures and with the intention to gain profits from increasing demand for air travel in Central and Eastern Europe, has created the PAG. Even though Poland is quite a significant market (at least locally) for air passenger traffic, the current structure of the PAG does not seem to boost it in the way that politicians and decision-makers intended. Also, the functioning of the PAG may seem controversial, mostly due to the fact that public assets were used to set it up.

However, if ratification of the Cape Town Convention by Poland moves forward, the country could be considered as a favourable go-to jurisdiction for aviation-related businesses, especially as there are a number of highly qualified staff.

Whatever the future of the PAG, it seems that the immediate effect of securing long-term benefits for Poland would be ratification of the Cape Town Convention.